I’ve been listening to Feist’s The Park, probably a song I should stay away from. Same with all the rest of my depressing music…Burn, Wish I Were, If You Stay…

I had a brief exchange with S yesterday and it just opened the flood gates of that (as it turns out) not-so realistic rockabilly, grungy life I thought I was living. He had a dream about me and the boys, “just like a quick flash or something,” he said. I guess that is all he’s capable of dreaming, or admitting anyway. Well…at least it was that. I actually thought, “I hope we haunt you…” I do wonder about him from time to time. God only knows what he’s up to. I miss him. Some of him. Not all. Not those parts that hurt me. Only the parts that seem so inconsequential now.

I had a very strange dream last night about DS, the guy I almost married back in ‘93 (with whom I hooked up with after,  coincidentally, getting no where with S). We were in a hotel room. He was in room #350 and I was apparently down the hall or on the second floor or something. Thing is, he was holed up in this tiny room with all of my journals and at one point, I was overcome by this gut feeling and realized it was a huge mistake that he should be. So I ran to his room and busted through the door and there he was standing in the center of the room, angry, sad, disappointed, disgusted with me, and there on the floor were my journals, all torn to shreds. I screamed at the top of my lungs, “Why?! Why???” And I got down on my hands and knees and began to pick up the scattered pages, crying, trying to piece it all together and get them all out of his room. I thought he would attack me or keep ripping up the journals, but he just stood there and didn’t move. Nothing. Just looked down upon me as I struggled. I felt at once humiliated and enraged.

I’m having some fairly vivid dreams lately. And I suppose it’s because I am trying to work something out in my head and can’t seem to do so during waking hours. Like this whole superficiality thing, and more importantly, my renewed obsession with Nathan Followill, the drummer from Kings of Leon. KVM and I determined last night that he is the archetype of  lust for me, that is, because as she stated, “he looks stoned and he’s not even that good looking” thus summarizing every guy I’ve ever fallen for.  But the matter at hand is that I’m beginning to think I am, dare I say it, shallow.

I mean, when I seriously consider what attracts me to someone, I do go for the mind. Mind, spirit, intellect, creativity. It’s all got to be there for me. Yet, there’s this nagging obsession with long haired, grungy looking, tattooed musicians that chips away at me–This Nathan guy is S and G and K. He’s Prince and Jimmy Ibbotson. He’s possibly even an earlier yet unformed version of BJ.  And the rockabilly, stoner, loser, musician guy is like this bad tune that keeps playing itself out over and over and over again in my life. I cannot make a life with him and yet he summons me. I cannot seem to be able to live without him. It’s like an affliction or a genetic defect in me. I don’t know. 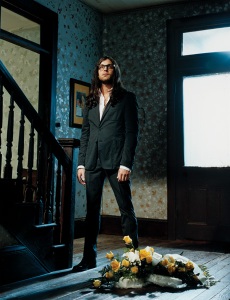 The superficiality comes in like this: when I was with S there were certain things missing. Certain things didn’t work (and I’m not talking body parts). But I didn’t care. I overlooked so much…so damn much…because his “look” fulfilled me. I felt redeemed, saved, delivered in his beauty…I buried myself in the shallowness of materialistic ideas like his tattoos or the glasses he wore or the way he dressed. It reminded me of something, though I am not sure what. Maybe it made me feel safe because I knew it wasn’t real.

I can’t figure it out, but what bothers me is that I feel on the brink of losing “him.” Not S, that is (been there, done that) or some rock icon like the dude in the picture. But just “him.”  The imaginary Disney-esque, archetypal guy of my dreams.

Years ago, when I was poised to marry DS, I couldn’t. He was brilliant. Well-educated. Clever. He loved me deeply. But he was not “him.” He was not the archetype. He was plain. He had fair hair. He wore khaki pants and plain t-shirts. He was responsible.  Physically or materialistically, nothing set him a part. S, on the other hand, back in the day, wore a chain on his wallet. His hair was long and kinky. His nose was pierced. His tongue was pierced. He had tattoos. He smelled like patchouli. He wore vintage shirts from the 70’s. DS had depth. S was the epitome of rebel.  But…where did my heart wander? To the kinky shallowness of the shore, not the ocean.

Here’s the big, glaring HOWEVER (coming at age 40, mind you):

I think I am at a point in my life where I finally recognize that shallowness hasn’t gotten me very far. I’m so very tired of repeating the pattern. I repeat it as a way to deny myself a true life. I repeat it as a way to deny myself a true identity. It’s my way of NOT growing up. It’s that I want to be something I am not- not always, but a lot. And that cannot be. And the rockabilly, grungy hippy dude can’t conform to my life either. He can’t fit here. He needs to be in the city with his grungy, hippy, rockabilly girlfriends. S and I were the culmination of two people who both wanted to be something they were not. He wanted to be normal and I wanted to be a rebel. He was my way of saying to the world, “I am not a suburban housewife who drives a mini-van and owns a mid-size corporation.”

My Aunt Sue said to me many years ago, the hardest thing we have to realize is that we are average. I never wanted to believe her, I still don’t want to believe her. But I suppose I have no choice. She is, for the most part, right. The obvious exception would be Nathan.