September 19—Well, P is up in NYC until Sunday visiting his long time “best” friend Alana who I think he has this emotional attachment to. He swears they’re just friends, but I have my doubts. They used to date, years ago, but it apparently never worked out and they still maintain a friendship. I never liked the idea of that. When you’re dating someone seriously, I just think girl “friends” (best friends, that is) are a little bizarre and ultimately threatening. Then again, when there’s trust it might be a totally different scenario. I wouldn’t know. Anyway, he stopped over last night to say goodbye, which was nice. He sent me a bunch of very nice emails too on how to meditate to feel better, and yet, the anger and pain is still there, welling up in some distant place inside me, locked away. I’m suspicious of his actions, I can’t see the good in this, everything he does is a sign of doom and rejection… 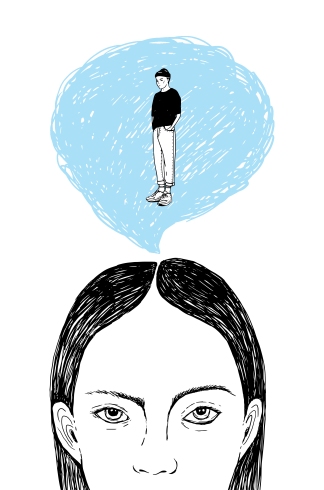 The drugs aren’t helping. I’m still obsessing. But it’s a stifled obsession. My brain is playing the negative thoughts over and over again, on a loop, but the heart feels nothing. How does a drug have the power to break a person up into two parts?

My point is, I’m still feeling rotten. But that too is stifled and suppressed. I feel rotten as if I exist somewhere distant and far away. Although later in the evening last night I did become rather content, right before he came over and while he was here. Something in me “awoke” and I was my normal happy self again. Perhaps my pain is just too much for this one little pill to handle.  But, gosh, it felt nice to be happy for once. It’s been so long. I haven’t seen that girl in a long while, I almost don’t recognize her.

All that I was capable of a year ago, all that work I did believing in myself and becoming stronger has vanished. I have no sense of myself anymore. I used to know myself so deeply in those few tender months before meeting P. I have lost all my courage. Why? Because I believe I am with the same man I left. Like C, P is a man whose actions don’t support his words. Ugh. I did again. I picked the same type of man.

And then the doubts and confusion comes in: I don’t know if I’m just being impatient or if there’s a real problem. Love addicts move so fast. Am I moving too fast? Am I expecting too much too soon? Am I trying to control him like I did with C? Because he’s moving farther away. I can sense it. Or should I tell myself that distance doesn’t necessarily mean rejection? P says he loves me. He likes to be close to me when he can be. Ahh yes, that is the key. When he can be.

When the resistance is gone, the demons are gone.

You see, lately, I’ve been realizing how alone I truly am. More so with P than I ever was with C. So, I see that as a negative in my relationship bigger than anything else because it hits the core of my biggest trigger: being alone. It tend to outweigh the fact that P gave up drugs for me, that he’s so darn good with my kids, that he can hang around my family and be OK with them, that he will make love to me again. Gosh, it took C and I three years to get certain things smoothed out. Perhaps it will take that much time with P too.

I had a dream that I smoked two cigarettes right before my 1-year anniversary. I was so disappointed in myself.

I have been greatly disappointed in myself lately. Disappointed that all I’ve learned isn’t there anymore. It IS like I’ve started smoking again.

I told P and Susan that I’m taking a break from the LA Forums. P thinks that’s a very good idea. Take the bandaid off and the cut heals, he said.

In the end I know the truth. That it’s time to face the demons. It’s time to stop resisting P’s time away from me. It’s time to let it in…Go ahead. Do your best to destroy me.