So, you met him in your hiking club and he flirted with you incessantly until you finally caved and gave him your number. You thought nothing of it until he called you a mere 8-hours later. With a little timid flirting, you agreed to a first date. You were giddy. Already the wheels were turning. He could be the one.

Your date was a dream and you had three more magical ones, each better than the next. You learned that he’s a physician, he drives an Audi TT, takes annual trips to the south of Spain and is a fabulous lover. During sex (yes, you’re having sex already, of course), you stare deeply into each other eyes with an unmatched intensity.

And then…suddenly, you don’t hear from him. Not even a text.

WTF? You were on the high of your life only to have it all taken away in an instant. It’s killing you to wait to see if he calls you back (maybe there’s a logical explanation), but, on the third day you panic, and reach out. A quick text to say, hey, remember me? He casually responds that he’s working overtime. But, something in the back of your mind says, No way. You recall a conversation in which he said he didn’t have to work this week. Something inside you twists. Like your heart is an aluminum can being crushed under foot into a flat, discarded piece of metal. You switch from rational to rationalizing. OK, maybe he got called to work at the last minute and failed to tell me.

A day after that, you decide to push. You call him and gently tug at him to come out with you and your friends to a party. You think, If I’m casual about it and just pretend like I do this all the time he’ll bite. And he does. After a bit of coaxing, he comes out, looking as hot as ever, but something’s off. It’s not the same. He seems distant and this is the fifth time he’s checked his phone. He apologizes and says, “Work.”

You decide to confront him. What you’re really doing though is looking for reassurance. Do you still like me, you ask. He smiles. For a second everything feels weirdly awkward. “I really think you’re amazing, but I live with someone. We’re kinda broken up. But, she wanted to get back together, and, well, I told her no. It’s all good,” he says. “I just want to be up front with you.”

Instead of seeing this for what it is: a huge red flag of unavailability and narcissism, your mind is racing. All logic has been thrown out the window and your emotional brain has hopped in the driver’s seat. What does this mean? He said they broke up. He said, “It’s all good.” Does that mean he’s free to date me? You play back his every word. He thinks I’m amazing. He smiled. He did, after all, come out. You also play back all those hot scenes on dates one through three, the deep kissing, the passion, the intensity, the laughter. He’s so hot. I want him. We’re perfect for each other, you think.

But, here’s where you need to get your head out of the clouds. He’s not perfect for you. He’s not even partly acceptable. He’s completely, unequivocally Unavailable. And instead of hanging on to only the positive information you’re receiving from this guy, you need to be a big girl and see the whole picture, which means looking at the real, not-so-pretty, fantasy-busting facts he’s feeding you. You need to acknowledge the following signs and start to understand that these signs typically mean UNAVAILABLE. 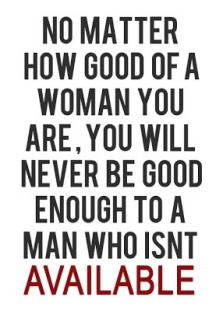 In a sea of romantically passionate and fantasy-fulfilling moments, these several negatives don’t seem to weigh too heavily. And yet, they weigh heavier than you are willing to acknowledge.

An unavailable man or woman may come on strong and show great intensity, but they are not emotionally invested in the relationship, nor do they plan to be. And while they may see you every day, or call you, or be slightly more available than the guy described above, there will always be something keeping the unavailable individual from committing fully.

Unavailability also looks like a lot like avoidance. An avoidant may verbally commit to a relationship, but then avoid intimacy, conflict, romance, communication, whatever triggers him to “avoid” and seek safety by turning inward. You then feel “neglected.” An unavailable person, on the other hand, typically does not verbally commit, but instead, may be more prone to engage in sex, communication, and romance, but only partly, thus leaving you feel confused, with mixed messages, as though he is only marginally invested in the relationship.

Unavailable people have myriad ways in which they remain unavailable. They could live far away.  Work, family or other responsibilities might keep them from ever being able to move closer.  They could have a job that keeps them from going out on dates, or they could live with someone, be married, or be in a previously committed relationship. Subtler but no less significant signs of unavailability might be that they blame you for having a trait or a lifestyle or a habit that makes it impossible for them to commit to you. I once dated a guy who told me after a year of us dating that we could never be more than just lovers because I made too much money and it made him feel “emasculated.” Whatever it is that keeps him from getting closer, it’s usually an insurmountable obstacle that he will not be able to overcome in order to be with you.

In The Break-Up Journal this week P’s unavailability is getting more noticeable, and yet, I only seem to mention it as if it doesn’t relate to me. I don’t yet see how staying with an unavailable person makes me unavailable also.

You heard right. The bottom line when it comes to unavailable individuals is that if you continue to pursue one or stay with one, YOU become unavailable as well. Why is that? Because you are choosing to commit to someone who only half commits to you. If you are serious about love, intimacy and relationships, it means that you are willing to find a partner who is equally interested in love, intimacy and relationship.