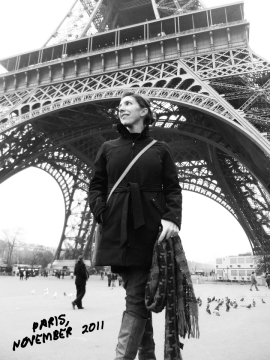 At 10pm tonight I am hopping on a plane with my two sons and flying off to Paris amid airline strikes and rail strikes and increased taxation on tourists and god knows what else. Red flags galore. But, oh, my heart! And all I can think of is, get me there as fast as you can before I explode.

I lived in Paris in 1989, when I was 21-years-old and a full-fledged love addict. Nothing meant anything to me back then if I didn’t have a man, except the city of lights. I stayed there about 5 months studying French at the Alliance Francaise and working as an au pair,  and while I did fall in love, it was more with the city and the Parisian culture than with any one man. After I ran out of money though, and my mother forced me on a plane back home, I carried a torch for France for many, many, many years, and was never able to go back until 2011 when I was flown out to Amsterdam for the IDFA Film festival for my role in the Love Addict documentary. That I am able to go back again so soon is a miracle. Or rather, more likely, my addiction kicking in, which leads me to confess that I may have been wrong all these years– we are never fully “cured” of our love addiction.

I remember a woman on the forums a while ago who was addicted to a famous dead poet or writer. She couldn’t stop fantacizing about this “imaginary” man, and as odd at it seemed to me at the time, I realized I had had the same fascination with a city. I mourned the loss of Paris just like any other PoA. I felt abandoned, lost, miserable. I felt it was an unrequited love. But I couldn’t really put my finger on who gave up on who. Did Paris give up on me, or did I give up on Paris? I went into a very deep depression for a couple years after this and never fully recovered. Nor did I muster the strength or courage to get back. I allowed other dreams to get in the way.

And yet I didn’t. I remember back in 1993 I was poised to marry an American who was deeply in love with me. I was more in love with the idea that he loved me. And so, when I posed the question, “would you be OK if we tried to move to Paris for a while?” and his response was a resounding No, I tweaked the course of our lives forever and left him. Only after  I had bought the white dress and put a down payment on the catering hall, of course. A small price to pay in order to get my “dream” back.

When I touched down on French soil in 2011, D was with me. I could barely catch my breath. He had to hold my hand tightly. We exited the Gare du Nord, caught the Metro and came up and out of the ground under a starry sky. The amber glow of night-time Paris is indeed why it is known as the City of Lights. And as I stood, basking in the frenetic blaze  between the rue de Rivoli and the Tuileries garden, I burst into tears. It was all too much. It was too good to be true. And it is what every love addict dreams of. The moment they are not only reunited with their love, but that that love is reciprocated. Paris hadn’t forgotten me. She welcomed me back as if no time had passed between us and she was every bit the lover I had waited for all those years.

And yet, she was gone in an instant. Once again out of reach when I flew back home and back to reality. A new but  familiar ache to take her place. Being in Paris after all those years was glorious. And yet, what was it? Eating cake fulfills momentarily. It takes the edge off, temporarily. Until you can find that next big hit.

In less than 24 hours, I will get it. Another whopping hit. And possibly another. Just last night in fact, we met our new neighbors, one of whom is an artist who travels to Paris twice a year for trade shows. We clicked over wine and good conversation and she’s already put out the invitation to join her on one of her trips. But will it be enough? Is love ever enough? As a recovering addict who has learned a thing or two, I know it’s not.  I know that love, all by itself, is a rickety chair with wobbly legs–whether it be love for a man, woman, bottle, country, city or a dead poet. Love needs substance. It needs the fortification of rationality and purpose. And it needs to come from both ends. I can’t keep taking from Paris like a love sick succubus. Perhaps, I need to give back to make this romance work.

For now, I plan to teeter on that chair and see what I can see without toppling over. When I get back, however, I need to reassess if I can turn this achy addiction for Paris into something a little more meatier, healthier. Perhaps I could return to school and take french lessons. Perhaps I could try to see if my company wants to market our product there. Perhaps I could write about my travels for a travel blog or magazine. Whatever the case, my addiction for Paris is another hurdle I need to learn how to deal with or overcome or succumb to. Sure, I could be content to travel there on vacation from time to time. Like a normal human being. Take my stroll around the Eiffel Tower, have my cafe au lait and be done with it. Or can I? Addicts can’t really be content with just one little drag off the cigarette, one hit from their PoA. We sometimes just can’t be normal. We need to burn, burn, burn like fabulous yellow roman candles exploding like spiders across the stars, as Jack Kerouac wrote in On the Road.  And for that, addiction is tricky. It can make life seem, at once, intoxicating and tragic.

But let’s not go there. Tomorrow morning,  I reunite with an old love. Let me bask in the euphoria of my temporary insanity. Just for a moment.

6 thoughts on “Addicted to Paris”